Why Are Lab Interfaces So Hard?

Taking a frequently asked question off the pile for today's post: "why are Lab Interfaces so hard?" Variants include "why do they take so long to get up and running?" and "why are they so expensive?" and "why don't they work better?"

Here is the most common form of clinical lab interface I encounter:

None of this is difficult, technology-wise. I have written such interfaces from scratch in about 8 working hours. Provided that the specs are good, the set up and and programming is more tedious than challenging.

(The specs include the mapping of test codes across menus, by the way. Why that mapping often gets left as an exercise to the programmer I will never understand.)

It is becoming increasingly common to set a target of 24 hours for bringing up such an interface: if you have a working interface framework and a reasonably seasoned team, this should be quite doable.

So-called Direct Interfaces are becoming more talked about. I have yet to see one deployed in the real world in my consulting practice, but I like the idea. In theory this would cut do the network configuration time, but I suspect that the added x509 certificate wrangling will often more than make up for it.

So why does it take days or weeks or even months to get an interface up and running? In my experience, the roots causes are two: bureaucracy and misaligned agendas.

The bureaucracy means that I have spent the majority of my time on projects like this walking from cube to cube, paperwork in hand, looking for permission to connect to another organization. Or hours on the phone, chasing up-to-date, accurate specs and precise explanations of terms like "alternate patient ID".

The misaligned agendas make pulling together in the same direction difficult:

So what IT hears is "buy a Cisco VPN license; pray that our Cisco VPN appliance has a spare connection; punch a hole in the firewall, but don't botch it leaving us open to hackers; assume responsibility for monitoring the health of that VPN tunnel."

To many IT ears, this sounds like a lot of work, some real money and an on-going obligation with little upside and huge potential downsides. So the network folks become what my firm calls "stoppable"--any hitch in the plan brings them to a halt. Who knows? If they delay long enough, maybe the project will go away....

So why is it so hard, take so long, often have never-resolved issues? Because navigating bureaucracy is exhausting and overcoming organizational inertia takes a long time.
Posted by BFH at 9:50 AM No comments:

NPI: No Office = Bad For Lab


Yesterday a sadly familiar issue landed on my desk: how to make NPIs work for lab results.

NPIs were brought to you by CMS, so they have to be good.

To quote from The National Provider Identifier (NPI): What You Need to Know

This is logical, but it is very bad for clinical laboratories. Physicians practicing medicine do not fit the model of citizens paying taxes: if I have seven offices, which I visit in rotation, I want the labs for patients who live in Shoretown to go to my office in Shoretown: sending them to any of my other offices creates work and runs the risk of me not having them where and when I need them. But sending them to all my offices creates a blizzard of faxes and a mountain of filing.

Unless, of course, my practice has invested in and correctly configured a centralized, distributed Electronic Medical Record with a real-time, bidirectional Lab interface. Which, very likely, is not the case. At least not from what I see in the field. At least not yet.

So here I am, stuck in the real world, creating yet another mapping from internal LIS ordering ID (which is office-specific) to NPI (which is not office-specific but which is required by many legal agreements).

The good news is that NPI excels at figuring out which providers merit a fruit basket for all their business: I can analyze the ordering patterns by practice pretty easily by associating NPIs together into a practice. I just can't help you with where to send that fruit basket. Or those lab results.
Posted by BFH at 4:56 AM No comments:

We are looking into ways to make draw data and ordering statistics more useful to our clients. Perhaps a map? Check out this excellent tutorial on how to get started: I did and was very impressed.

Our proof-of-concept project has the following goals:
We are eager to see if the coolness translates into actual usefulness.
Posted by BFH at 10:20 AM No comments:

This looks like an interesting idea for our lab connectivity start up:

Random connections over the Internet, secured by x509 certificates, with the payload format unspecified. Assuming we control the certificates, we can be confident that our connections are secure from others and from the right computers.

We would use HL7 to encode the payload, of course. But this gives us a validated and accepted model for transactions in a cloud-based environment. Interesting. I feel a proof-of-concept project coming, probably built on Amazon Web Services.

This architecture also lets us circle back to this at some point down the road:
http://www.mehi.masstech.org/health-it/health-it-learning-center
Posted by BFH at 10:22 AM No comments:

When I consider this whitepaper from Athena Health, I am struck by the fact that Electronic Health Record (EHR) remains such a vague term with regard to the audience. I can't imagine talking about actual instances of EHRs, as opposed to the generic concept of EHR, without regard to the EHR user. I would say that lumping in solo practicioners, small practices and large practices is a bad idea, an example of the fallacy that "if we solve the most complex case, all other cases will work."

This is especially true for clinical lab orders: every EHR is happy to provide menus for the 20% of the catalogue which makes up 80% of the orders. But there seem to be no EHR vendors who want to support the most esoteric, harder to order labs, let alone properly store and display those complicated results.

Worse, the notion of "lifetime results" is also poorly supported; yes, it is true that some small number of years is as long as most lab results are relevant, but what about those tests whose value never goes away? Those genetic tests which we see repeated over and over again?

Email ThisBlogThis!Share to TwitterShare to FacebookShare to Pinterest
Labels: EHR

One of our clients retired our custom draw station solution in favor of Epic, but quickly found that Epic could not provide the management reports we had provided, so we were asked to somehow recreate our report package in the new environment.

After some consideration, the solution we choose was this: an extractor of data from the LIS (SoftLab) to populate the database on which the reporting package was based. So the orders come through Epic, into SoftLab and then into our database.

Once we defined and refined the business rules which let us determine which orders were collected in draw stations and which were not, the rest of the puzzle fell into place. 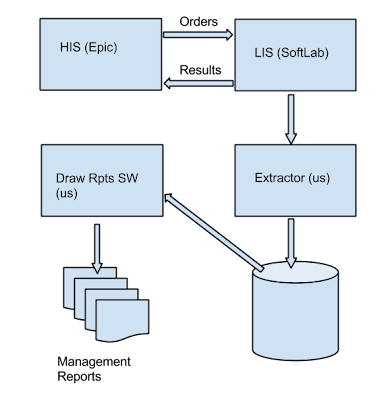 Along the way, we uncovered some ordering issues--misconfigured menus in Epic, out of date test definitions in SoftLab, receiving procedures not properly adjusted for the new environment--which is the first step to fixing them.

We also learned more than we wanted to about how orders are stored in the LIS, but that will be useful down the road I'm sure.
Posted by BFH at 2:15 PM No comments: